The mysteries of high school in Texas 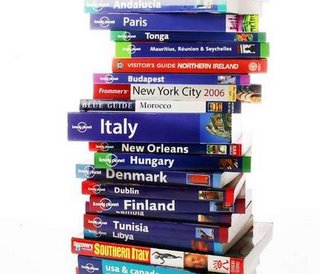 I've lived in a lot of places.  From Florida where I grew up, to years spent in the Rockies, Pennsylvania and even a brief stint in New England, I've experienced a lot of regional "quirks".  But with a daughter now in high school in Texas, the mysteries have deepened.

We thought that the weirdest thing so far was the fact that in Austin even people who don't have kids in the local high school buy season passes to the high school football games. And they really go!

But the "strangeness factor" jumped several degrees yesterday when we accidentally encountered something called "Mums" at the local Michael's. No, these are not the flowers, although a silk version of them is involved. 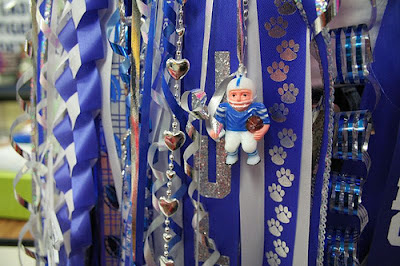 And best all, when these things are all assembled, girls wear them to school! And in some schools, to the Homecoming game as well. They're worn pinned to shirts or jackets (or in some cases to bra straps to keep them from tearing holes in clothes because of the weight of it all), or tied around necks. 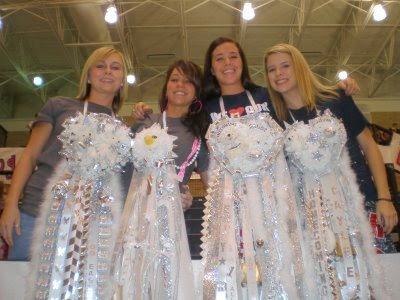 Boys get off a bit easier. They wear a smaller version of the traditional mum, attached to a garter and worn on the arm (ideally over a letter jacket, I'm told.  This is, after all, Texas!) 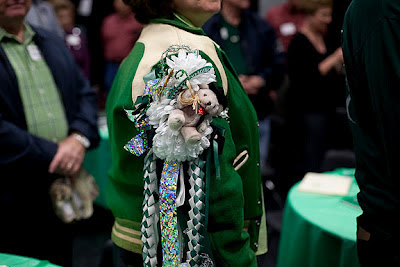 And as if all this silliness wasn't enough, there's the matter of the cost of this autumn high school tradition. This enormous hot-glued bundle of fake flowers and ribbon and do-dads can easily cost hundreds of dollars.  Sometimes over a thousand.

A very basic mum base at Michael's starts at $30.  And from there, girls (or moms or in some cases, boyfriends) are expected to buy and add all the extras from stuffed pets to blinking lights. There are pages and pages online explaining how to make and customize a mum.  And even more sites selling them, all for upwards of $200.

Needless to say, we're going to make our own.  I'm handy with a glue gun.  I found a step-by-step Homecoming mum video.  We stocked up on ribbon using this week's Michael's coupons.  The Mardis Gras beads and tiny stuffed bear are coming from the dollar store.  Not sure about bells or lights.  But we're going to try and keep the cost below $20.

And once it's all done, we'll take a picture or two of our creation as my daughter heads out the door. And I promise not to giggle too much...at least while she can hear me.

We better not laugh too much dear. You told me that parents also wear smaller ones.

I'm so glad I stumbled onto your site. I'm new to Texas -- was looking online to figure out these mums were that people are talking about. A friend posted the one she made on FB -- no clue what it is till I found your site. Thanks!

I made my own, too. Some of them were RIDICULOUS. I totally employed the bra strap trick too. :D

At my school, the guys always made mums for the girls and the girls made garters for the guys. There's an exchange date planned with your HoCo group within the week before the game. (:

I've lived in Texas all my life and I find it hard to believe that other states DON'T have mums for homecoming. You've got to do special stuff for homecoming. I mean, after all, it's HOMECOMING!

I have been in Texas nearly 8 years now. My daughter enters high school next year and I am still baffled my this mess...when and where are these worn? At school? At the game? At the dance? It is all so very odd.... 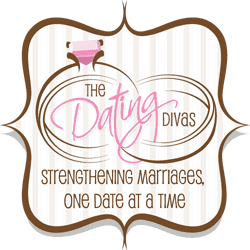